Taken from the 'Window on Wigan' book with kind permission of the author Geoffrey Shryhane, who also writes Wigan World for the Wigan Observer.

It was five o'clock on the afternoon of Tuesday, August 18, 1908 when an explosion ripped the heart out of the Cannel Mine (No 1 Pit) at Abram's Maypole Colliery. Seventy six men were killed in Wigan's biggest mining disaster. It was an unprecedented mining tragedy for the area.

This terrible explosion happened many years ago - yet mention the Maypole and we Wiganers immediately think of all those men who lost their lives.

The blast deep underground instantly turned women into widows. Robbed children of fathers. Sisters were left without brothers. The deaths altered lives for hundreds of Wigan people and some of the first detailed reports were carried in the Wigan Observer just four days after Hell happened in No 1 Pit at the Maypole.

For hours after the fireball had ripped its killing way through the pit, yellow smoke poured from the shaft - a stark aftermath of the horror underground but it was not until November of the following year that most of the victims were brought to the surface. And the last body was not recovered until 1917, nine years after the blast. Recovery of the bodies was delayed because the pit had to be flooded to quell the underground fire started by the explosion. Just seven bodies were brought up before the water was released.

There were three survivors - Edward Farrell of Cambridge Street, Wigan, William Doran of Hardybutts, Wigan, and Richard Fairhurst of Crown Street, Hindley. The lucky trio, brought out hours after the explosion, had been working in a part of the pit shielded from the main blast.

Those old Observers, their yellow pages crumbling to dust at the edges, tell in total detail the complete story of the Maypole Colliery Disaster. Week after week, edition after edition, the pages are full of the tragedy and its many offshoots, including the setting up of the Fund to help the widows and orphans.

But first, there are descriptions of the underground explosion which brought tea time to a standstill in Abram.

Little mining communities live with the fear of a great tragedy. And on that Tuesday, the people in the pit village didn't have to be told. They heard the blast and within minutes, hundreds were rushing along Park Lane to the colliery yard. The enormity of the explosion was realised immediately and while some people were utterly distraught, others waited in the rain, stunned and motionless.

Even when all hope was gone, the relatives still waited, the last persuaded to go home after two days.

News of the appalling loss of life was banner headlines in national newspapers which told how men with breathing apparatus had come from Yorkshire to assist. But all too soon, the reporters went off to other stories and the people of Abram and Wigan were left in their grief.

The inquests started three days after the explosion and concluded on July 8 the following year. Accidental death verdicts were recorded on all 76 victims. The Coroner heard many stories that the explosion had been caused by gas, but mine officials argued that Wigan pits were free of gas. Yet gas had been reported on the day before the tragedy.

Researchers over the years have concluded that pressure on the miners themselves played an important part. For the men did not earn unless coal was handled. When one shift ended, a small army of shot firers entered the pit to bring down more coal for the next pitmen to shovel.

Yet, there had been distinct warnings by government agencies about the underground gas and one train of thought was that the shot firers, instead of using a number of small charges to bring down the coal had used one large charge instead. But the Coroner heard that the shot firers themselves had died in the blast.

All the victims of the Maypole were buried beneath a specially commissioned monument in Abram Parish Churchyard. And for decades the Lancashire and Cheshire Miners Permanent Relief Society paid out to the widows. 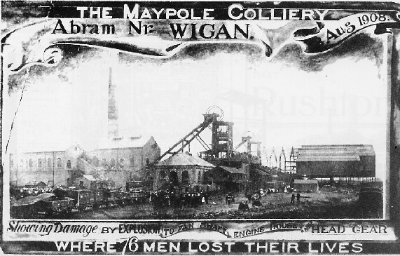 Postcard honouring the 76 men who lost their lives in the disaster. These were used as mourning and condolence cards.

The miners who lost their lives:

There are a couple of names that I am missing, if anyone can help, please email me.