The Funeral of Meyrick Bankes of Winstanley, 1827

The Bankes family had been resident at Winstanley for over 200 years by the time that William Bankes, the then owner of the property, died without issue in 1800. Like many land-owning families of that period, the Bankes's fortunes had varied, but, on the whole they had prospered well, principally due to the coal which had been worked in and around Winstanley.

William Bankes's heir was his cousin, the Rev. Thomas Holme, curate-in-charge of Up Holland from 1758 to 1767, who, after succeeding to the estates did not survive long, and died in 1803. He and his wife, formerly Mary Meyrick, had 12 children, of whom the eldest surviving son was the Meyrick who died in 1827.

Meyrick started life as a midshipman in the Royal Navy, but appears to have left the service in the late 1790s. On the death of his father in 1803 and by the will of the late William Bankes, he assumed the name and arms of Bankes. In 1798 Meyrick married his first cousin Anne Lally, daughter of the Rev. Edward Lally, vicar of Whitegate, Cheshire. An heir was looked for in 1809, but all hopes were shattered when the poor lady died shortly after the birth of her stillborn son. In the following year, Meyrick married his second wife Maria Elizabeth, daughter of Thomas Langford Brroke of Mere, Cheshire. Two sons were born, Meyrick in 1811 and Thomas in 1812.

Meyrick and his family lived at Winstanley and engaged in the usual country pursuits of the period. He carried on a considerable colliery enterprise on his own account and purchased additional land "which adjoins the publick highway which leads into the Wigan and Warrington turnpike road, and affords an easy and valuable communication by which the coal gotten in the principal estates in Winstanley and Pemberton might be brought into the market with facility and advantage."

In 1812 he agreed to an extension of the lease of the Orrell collieries originally granted by his cousin to Messrs. Clarke and German in 1792. The manager of these collieries, Robert Daglish, introduced the first commercially successful steam locomotive used in the Lancashire coal-field, by which means coal was conveyed to the Leeds and Liverpool Canal.

Meyrick was high sheriff for the County in 1805, and appears in the lists of commissioners of the peace in 1814 and 1820. The elder of his two sons was educated at Eton, and it was during his residence there that Meyrick rented Cromwell House, Old Brompton, London. Here he died after a long illness in the spring of 1827.

The fashionable firm of Gillow & Co. of Oxford Street, London managed the funeral, and the steward at Winstanley had the responsibility of making all arrangements for the arrival of the funeral cortège, which appears to have taken a fortnight to reach its destination. Instructions were conveyed to the steward by Gillow & Co. in the following letter:


You will see to the vault at Up Holland being ready in time and everything also needful, that the clergyman is in attendance at a little before 12 o'clock. Hang the pulpit at Up Holland with black cloth (not too expensive) also the pew and pulpit at the Chapel which the family use* (a cloth of about 14/- a yard is what we use). You will be pleased to provide 8 men as bearers for Saturday morning, also four mourning coaches with 4 horses each either from Wigan, Warrington or Liverpool, to be at the house at the latest at 10 o'clock on Saturday morning. Mr Langford Brooke wishes the horses that come from London to be stabled at the Hall, there are 14 in all, 9 of our own had better go to the nearest public house where good accommodation can be had. The funeral leaves here at 6 tomorrow morning by way of Manchester. We are sir, your obt. servant.
Gillow & Co.

* The Bankes family usually worshipped in Billinge Church. William Bankes and his wife were buried there, and Meyrick had presented a panel of the royal arms to Billinge Church to commemorate the victory of Waterloo.

The coaches which followed the coffin were occupied by the following mourners:

The account paid to Gillow & Co. reads as follows: 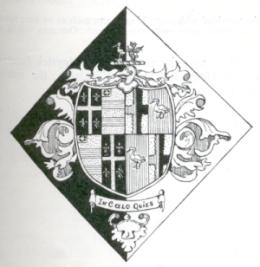 THE HATCHMENT OF MEYRICK BANKES

Bankes: Sable, a cross or, between four fleur de lis argent, a canton of the second.
Holme: Or, two bars azure, on a canton vert a chaplet gules.
Brooke: Or, a cross engrailed party per pale gules and sable.
Langford: Gules, a shoveler argent.

The Bankes family motto Nullius in Verbe (Not trusting in words only) gives place to In coelo quies (There is rest in Heaven).

After the funeral the hatchment, or achievement, was hung on the house of the deceased for the period of mourning, after which it was removed to the church where the internment had taken place.

The two wives and the two sons of Meyrick Bankes are all buried at Up Holland. Maria Elizabeth, the second wife, survived her husband until 1850.