No green flag for the Wigan Flight in this year's awards.

Hardly surprising as the grass has been overgrown all year and was only cut recently.

much the same on the canal paths and trails off the canal and around the flashed, some paths unpassable as the nettles and thistles have met mid path and 'Bite' ya as you try to get through, Its the bloody woke brigade again with their, " save the bee" campaign,

The paths around the Red Ponds have been cut back with a mower and are perfect for walking and cycling.

I don't know who is responsible as I have never seen anyone doing the work.

No complaints from me as they are doing a great job.

IN fairness to someone ,they have tried ( rather dismally ) to trim all the nettle's ,weeds etc along the "infamous coach road" at goose green st.paul's church area. The footpath is a disgrace when-ever i write to the clown-council or churchy folk they apparently go silent . GB

Tell him that I am bald and that is the only clue that he is getting.

It certainly narrows it down a bit,

Good news! A C&RT volunteer has told me there was a clerical error and …

Wigan Flight has retained its Green Flag Award status for a second year.

As well as that …

Wigan C&RT volunteer, Peter, has won a prestigious national award for his volunteering on the Leeds & Liverpool Canal.

Lock Keeper of the Year 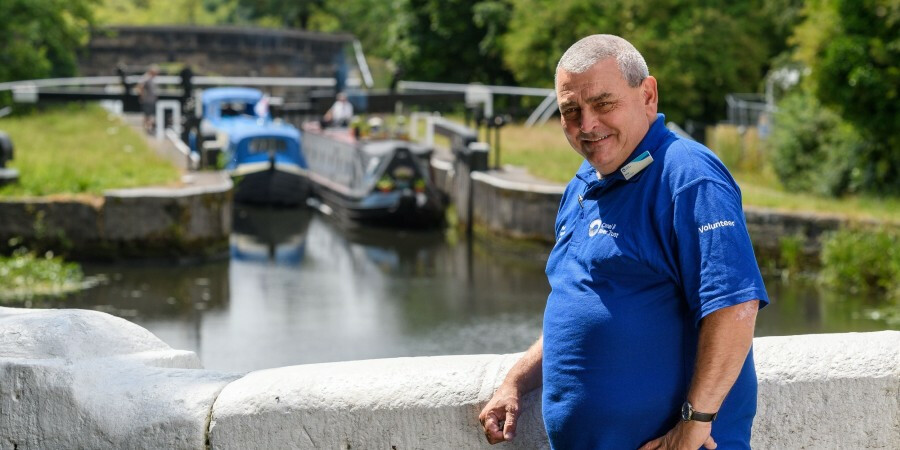 That is very good news

A brilliant 1976 history programme which features the canal at Gathurst, Wigan Flight, and Wigan Pier. It’s presented by the late Allan Waplington who was a history teacher at The Deanery in Wigan for a while. 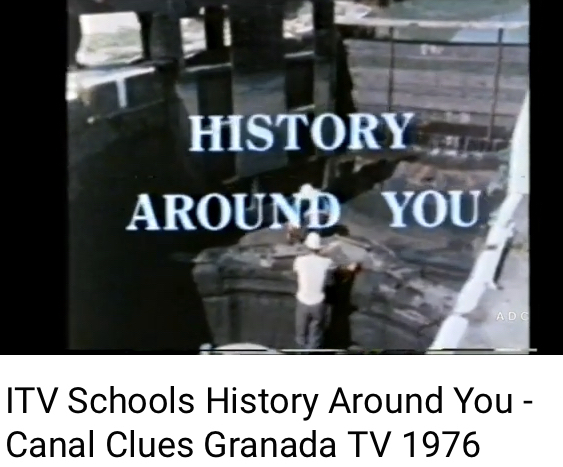 Series 3 of Robbie Cumming’s Canal Boat Diaries is to be repeated - the first episode features Wigan & it’s on BBC One, Tue 9th Aug at 7pm. 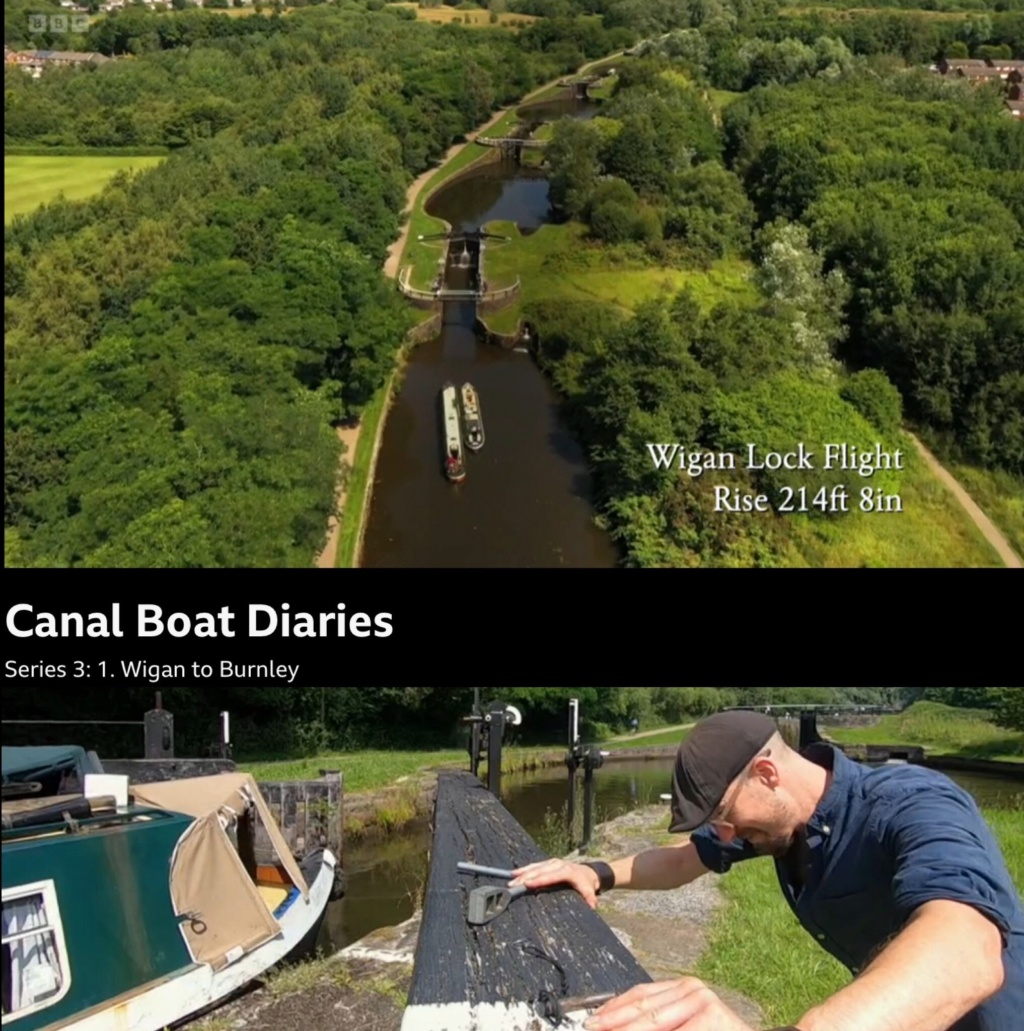 Robbie: “With 23 heavy locks over a few miles this is hard work!”

"A brilliant 1976 history programme which features the canal at Gathurst, Wigan Flight, and Wigan Pier. It’s presented by the late Allan Waplington who was a history teacher at The Deanery in Wigan for a while"

I remember Mr Waplington, or Woppo has we called him, he was a really nice and decent bloke, he had his office in the Sixth Form Centre, so he had some sort of role in the Deanery Sixth Form, but I cannot remember what it was, he wasn't the Head of the Sixth Form, because Mr Sparks had that title, and Kay Burley was there for a short while, and then she left when she got a job at the Post & Chronicle

I didn’t know that about Kay Burley, TTS. I do remember Mr Sparks from my days in the Deanery Sixth Form, (late ‘80s), but don’t know if Mr Waplington was still there. He does seem to have been a great teacher from the programme.

He left and became an headmaster somewhere, but in the closing shots of that program, there are a couple of interesting things, the small train going over the iron bridge across the canal, was that the mineral line which ran from Gathurst Station, across the canal and into the ICI dynamite works at Gathurst ?

On the Wigan flight, the old steel arch bridge, which carried the Whelley Loop Line over the canal, is still in situ 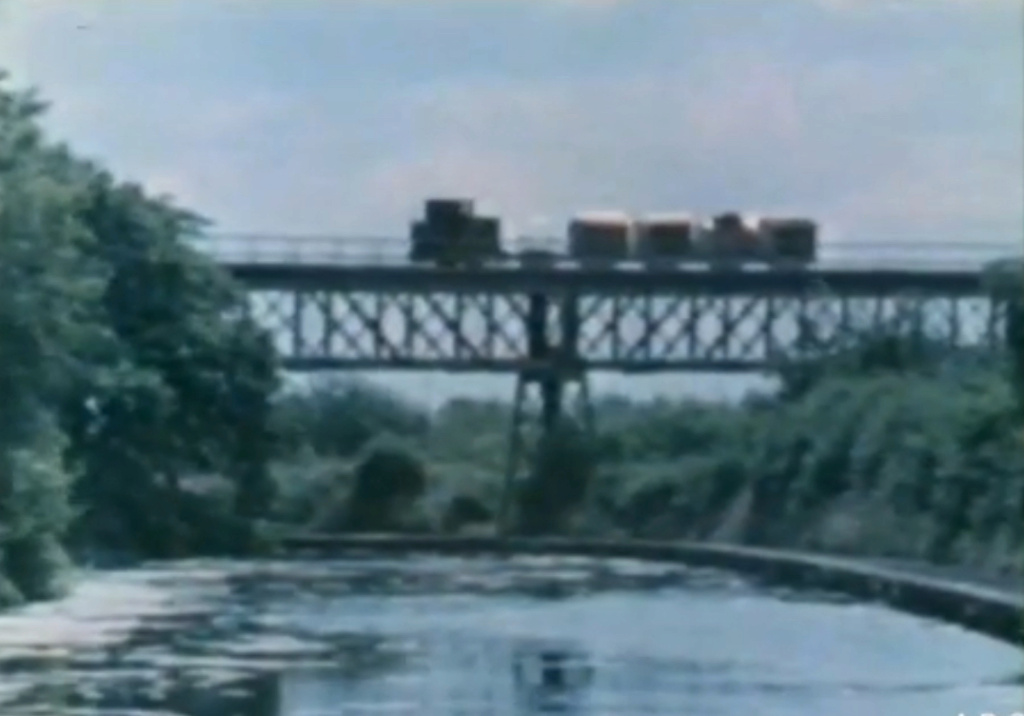 On side by side maps, the position of the bridge support, suggests it is the viaduct which was at Gathurst

On about Alan Waplington presenting 'History Around Us' for some reason the Deanery kept it quiet, it only came to light when a lad who was in my class watched an episode, when he was off school being ill, and when he told us about it, we didn't believe him, because the lad in question was a daft bugger, and of course he was Adam Ant about the fact that he had seen one of the school teachers presenting a TV series, but this was in the 1970s, and the only info you could get about television programs, was reading the info in the Radio Times and TV Times, and 'History Around Us' was a schools program, which was shown in the mornings, and you can tell it is aimed at young children, but in the listings it would just say something like '10.00 - 11.25am for schools and colleges' but the actual school programs were not listed, so there was no information to back up the daft buggers claim, and so we asked our form teacher, and she didn't know anything about it, when asked about it Mr Waplington did acknowledge the fact that he had presented the series, but he could not really deny it could he

Posted by: jo anne
"Wigan C&RT volunteer, Peter, has won a prestigious national award for his volunteering on the Leeds & Liverpool Canal."

And a thoroughly deserved award

He's given loads of his time up to volunteer for the canal trust. Always has a smile on his face and he really enjoys what he is doing on the canal.
A really, really nice chap Peter is. I'm made up for him

Well said, CheshireCat, Peter is brilliant. Not only does he offer exceptional assistance to boaters, but he is a great ambassador for Wigan in general.

A volunteering opportunity with the Canal & River Trust and The Brick: 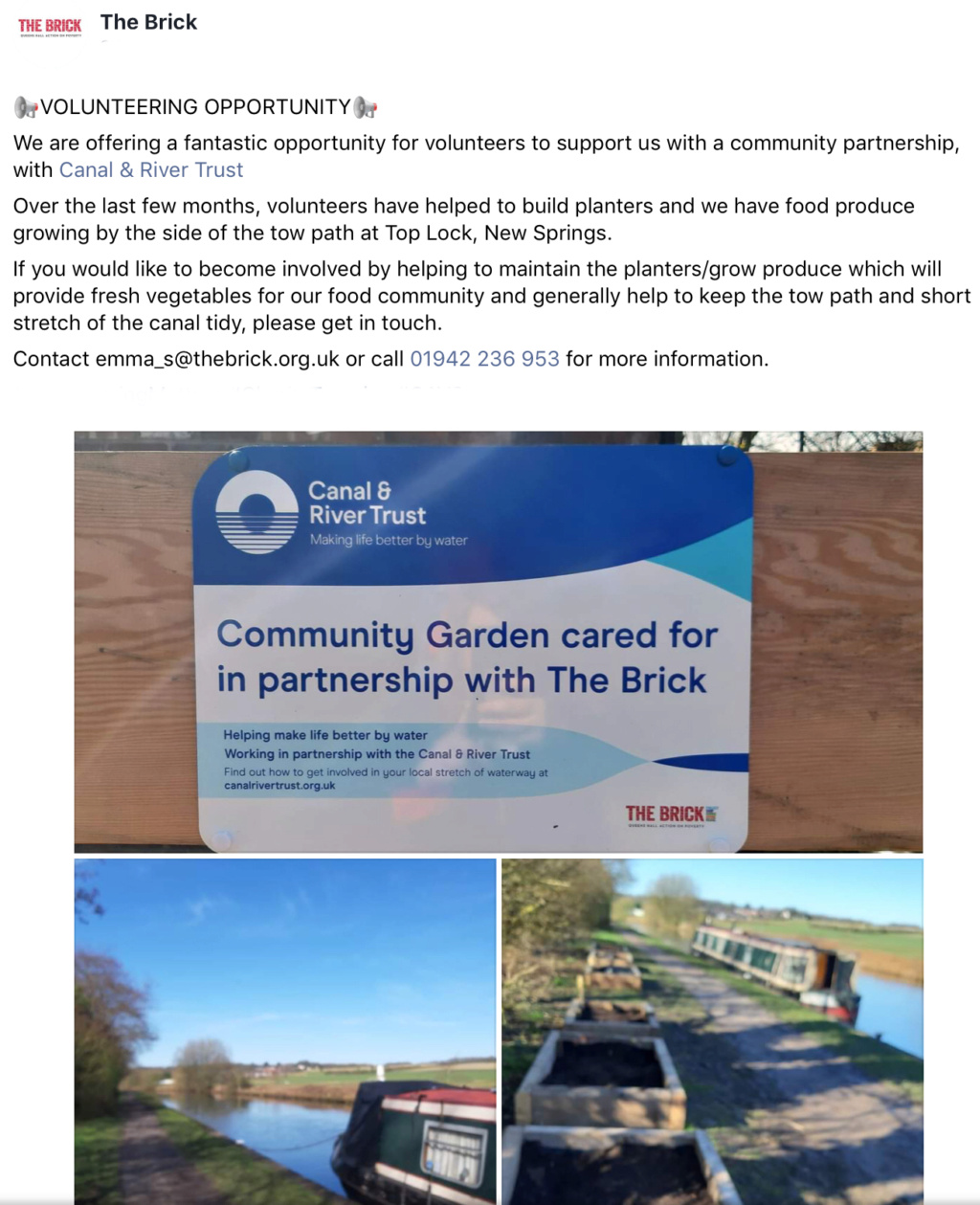 The group meet every Tuesday, 10am - 2pm, and tasks include vegetation works, litter picking and general towpath maintenance. 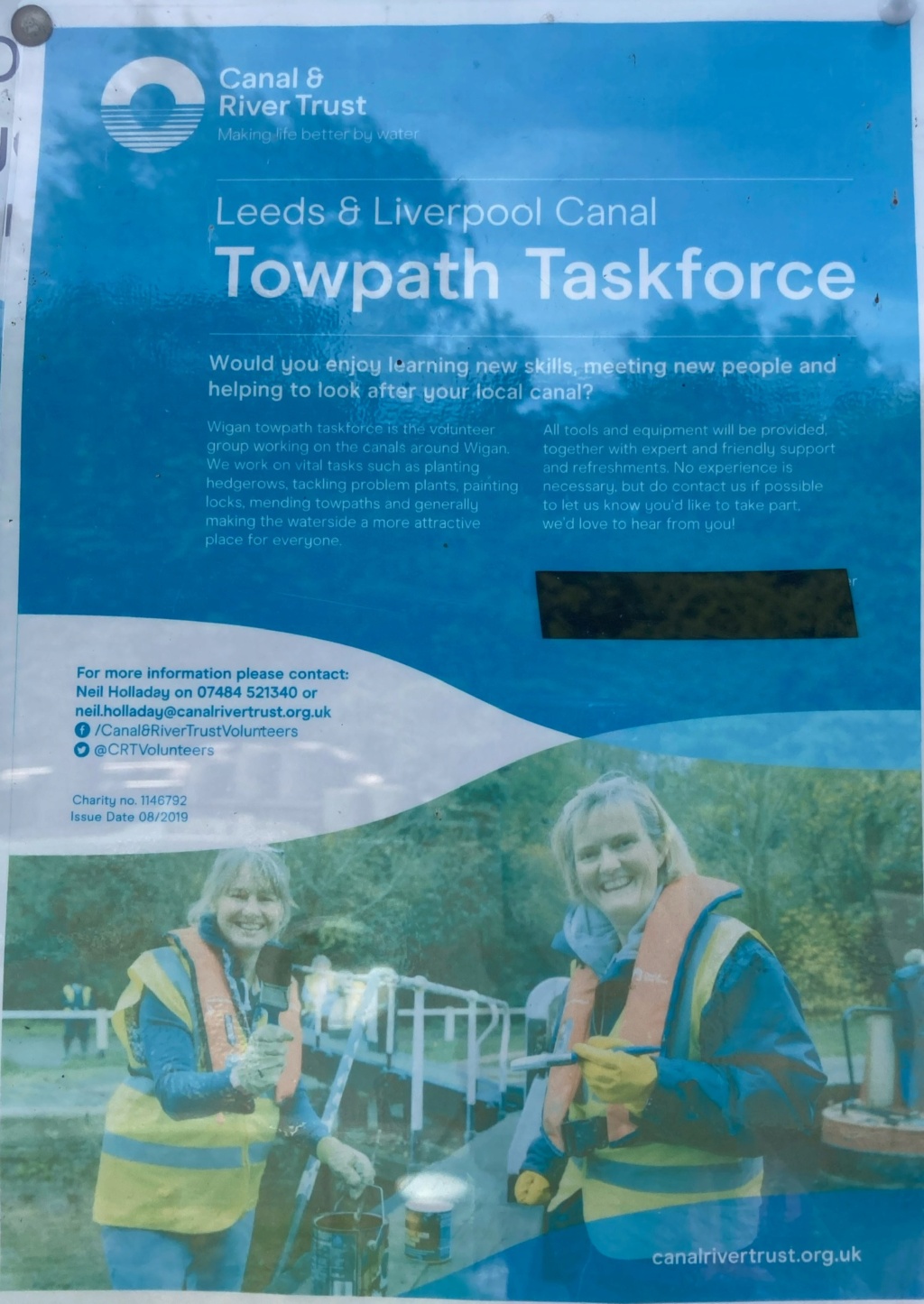 Tonker, Wigan (Lock) Flight doesn’t take to the skies! I suppose you might go flying if you don’t watch your step, and the towpath is an inclined plane in places.

Sadly, the Flight’s actually closed to boats at the moment due to the current water shortages.

I watched on iPlayer and was very disappointed with the Wigan section content.

What disappointed you about it, Anne?

It was quite fleeting, but I’m hoping the glimpses will pique more interest as a surprising number of people aren’t even aware the Flight exists.

Perhaps they thought it not a heavyweight, as flights go

"Ladies and gentlemen, the captain has turned off the no smoking and seatbelt signs for your convenience.
We are traveling at twice the speed of light and are entering warp factor three. At that time, we will be experiencing a period of weightlessness.
On behalf of myself and the crew here at CHA Airlines, we wish you a happy flight"

There is no need to tek piss

Wouldn't dream of so doing.

No need to be like that TTS, we were only making 'flight related comments!

Wigan flight,
had a fright,
in the middle of the night,
it saw a ghost,
eating toast,
half-way up a lamp post!

Ena M: “not a heavyweight as flights go”

A good song, but they’d think again if they had a go at pushing some of the lock beams.

Tonker: “travelling at twice the speed of light”

Not on Wigan Flight, it’s knots, and there’s little chance of boats ever breaking the 4mph speed limit. Walkers and joggers might be a bit quicker, but even the nippiest cyclists you have to watch out for only travel at the speed of Lycra.

As for the Flight seeing “a ghost”, I don’t know about that, but it is one of my favourite haunts.

jo anne… I was disappointed because I expected more in depth coverage of the Wigan section.

Anne, it would’ve been nice to have seen more of the Flight, but that’s not been the nature of the series. Robbie is trying to give his perspective of narrowboat life as much as showcasing the waterways. I think the format works overall, at least if ‘always leave them wanting more’ is your adage.

Robbie ascended Wigan Flight in Oct 2016 & made a longer vlog of his experience: Link 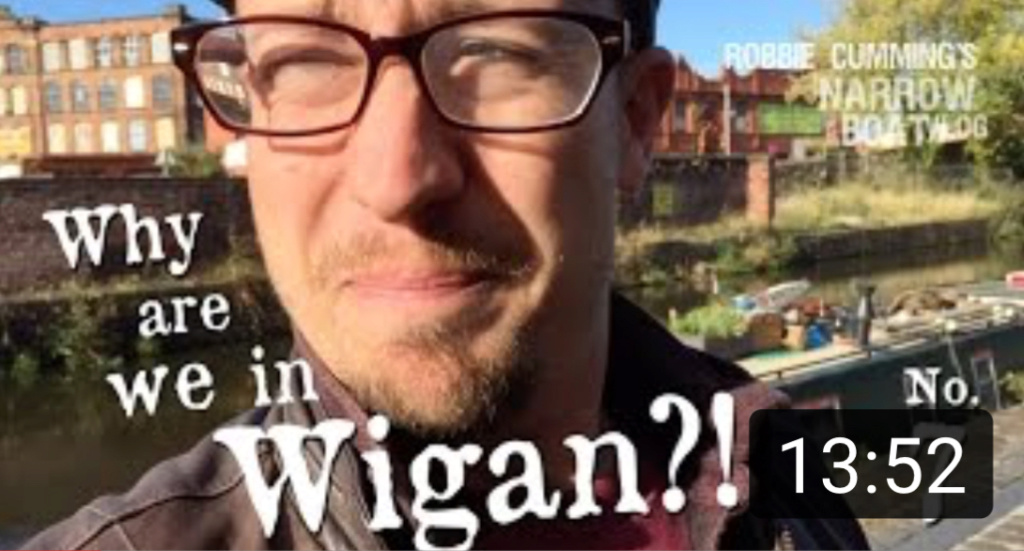 I have watched a few of those canal diaries programs, on Netflix or Prime Video, in those first episodes he was in I think it was the Midlands, and that boat of his, is quite old and knackered, and as regards filming in Wigan, the Wigan Pier complex would have been semi derelict, or undergoing renovation, I don't know when that segment was filmed in Wigan, but it is probably a good idea that the Pier was not included, because for quite a while the Pier itself, the wooden structure, was vandalised and smashed, so yoo would not have wanted that to be shown on the telly.

He filmed at the side of the Canals and Rivers Trust, Dry Dock, so he could have nipped inside and showed that on the program, that would have been an interesting point, because you don't find many of those on the national canal network.

After watching the guy on those first episodes, you can tell he is not going to win, any 'Brain of Britain' contest, and in the Wigan episode he had a right good skrike over a tee shirt getting wrapped around his propeller, and then his boat conked out in a lock, and he thought he was going to sink, like I said that boat of his, is knackered.

Also, when you are going up and down that flight, you get up it and gone, or down it and gone, because I would not like to be moored on that flight of locks overnight, because after the dark, the local flesh eating Zombies, come out take over that area

TTS, the entire Series 3 of Canal Boat Diaries is currently available on BBC iPlayer, and Robbie tweeted that series 1 is also to be repeated on BBC1 (NW) beginning the 17th August - so those episodes will be on iPlayer from then as well.

I don't know if yoo noticed but the Blog Video, and the Canal Diaries journey up the Wigan Flight, were two separate journeys, and in the 2016 blog video, the Wigan Pier landing stage was indeed vandalised and smashed, I think that the journey shown on the telly, is much more recent, but I much preferred the 2016 Blog Video, and his choice of pub in Wigan, which was the John Bull was of course spot on

As regards launderettes in 2016, there was one on Scholes Precinct and one on Ormskirk Road at Newtown

Yes, I've been there, done that, bought the t-shirt, as I have many Ince contacts. Rabbit Rocks too. I know 'em all !
What batters my head is, why is it called "Wigan Flaaaaight" when it's not in Wigan?
It should be "Ince Flaaaaight", raaaaight!

Mind you, the Liverpool Bus used to stop in Haydock, but it was still known as the "Liverpool Bus", as was so rightedly pointed out by my Gran's budgie!

Yes, Tonker, you know how it is. When travelling to or from Wigan the Ince bit is sadly just Ince-idental to some.

It’s the cruel way of the world.

St Helens has a canal, the Sankey Sugar canal, it terminated at the chocolate factory in Earlestown