Can anyone tell me why with all the major disruption in and around Wigan with these road alterations , does everything stop at midday on a FRIDAY (ie poets day)!" PISS OFF EARLY TOMORROW'S SATURDAY ..
Today there was a total of 3 out 4 area's where no work was being done , the only one was at the cross road at Brocol House & King St /River way /Darlington St i saw 4 workmen WOW had to rub my eyes but yes there were 4 men actually there ... SO this Question is for the HIGHWAYS DEPT TO TELL US WHY DO MOST OF THEM FINISH WORK AT NOON ON A FRIDAY . I would really be keen to know ................GB

I doubt that the highways dept have an account on Wigan World so they cant answer your question.

its a great british tradition GB, Not as much now as it used to be, It was common for the gaffer to come round on friday afternoon and pay the lads and as soon as the gaffer went, everyone made a beeline for't pub,

Perhaps this will assist you GB

Us hard working construction types finish early so we can get ready for the weekend, GB.

Stardelta, how is Golden Bear doing that in this instance? Someone on foot could’ve made the same observation.

I walked into Wigan via Darlington Street & King Street recently and the work is causing a lot of disruption for pedestrians too.

Good point........ but the real question is why on earth SHOULDNT those concerned finish work at 12pm on "POETS" day and furthermore why do they deserve to be criticised if they do?

Wigan is a definate no go area for me... When visiting in laws at Hindley... Its always 2 mile stretch... Downall green... Bryn... Platt bridge. Wigan has nothing to offer.... Do most of our shopping in St Helens (spit spit)

They can close Wigan down altogether for me, there is nothing of interest anymore in the town. 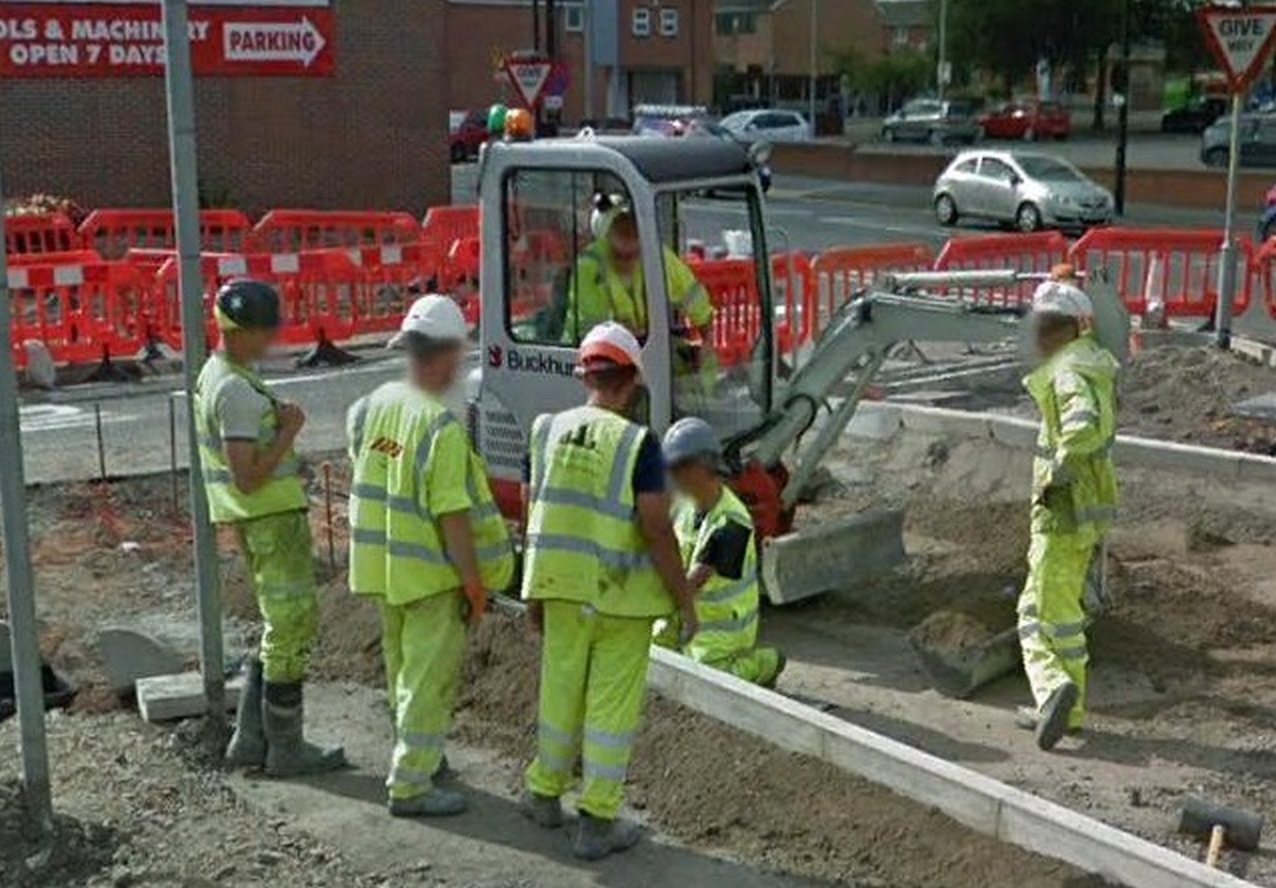 FIRST MATE ,Thank you for that link , Just to let you know i have filled in at two full pages requesting as to why they don't work after noon on Friday's ,I also asked why can't they work thro the week-ends ,to help speed up the traffic congestion that these works are causing . I will report any feedback i get to you via WW. I wrote that works like these abroad are done in a faster time than it take's in this country so i will wait and see ,again thanks .. GB

To the uninitiated those workmen might look like malingers but, in fact they are all conforming to the British standards of health and safety for construction sites . The driver of the machine needs a trenchman to watch for cables, pipes, unexploded discarded WD 40 cans that might cause damage if hit by the bucket, The guy laying the kerbs is under instruction from the worker looking down at him, the guy to the left is his labourer who will bring cee,ment and kerb stones, The one on the lampost is the butty lad, he is asking what they want from the butty shop,

What about the one on the right in the black T-shirt? He looks as if he's dancing with the guy on his left. And what's the massive mallet for?

the guy in the black tee shirt is training the lad on his knee's how to lay kerbs and the big mallet is called a 'maul' , after you lay the kerb, you put a level on the keb and 'tamp' it with the maul till its level, When everyone is happy with the standard of work, they all stand back and wait for 12 hours while the cee ment goes hard, Its all highly skilled and i remember saying to a kerb layer, " In plumbing we work to a tolerance of one millimeter" the kerb ayer answered, " you'd be no good at keb laying, we have to be 'Bob On '

Bob is a famous lad from around these parts often called our Bob, they made a poem about him, quite appropriate for POETS day

If tha Bob, don't give our Bob, that bob what tha bob owes our Bob, Our bob's goint , bob tha bob a bob on't nose,

I think its from days when a Gas bob was often lent to a nieghbour when't gas had run out,

That Lad in Sledges post was following advice from the great leader and former Prime Minster , Sir Winston Churchill who, himself always had a catnap during the working day,

You might be wondering why, I'm on the workers side here, Its because, no matter how hard a worker works, the desk jockeys knobble him, They set targets for them to earn bonus, As the lads learn how to get more done and earn more money, the desk jockey's increase the targets, they can't ever win, So they learn to reach the required performance, then shut down ,
the desk jockeys think they are clever because they have a draw full of diploma's from a college but, without a skilled workforce, they are worthless,

Not this bilge again. And if the guys earned their bonus it needs someone to ensure it finishes up in their bank account. It needs someone to buy all the PPE they are wearing. All that safety fencing doesn't drop out of the sky. I have worked on pipes that you could stand up in and walk along and . as vital as the guys on the ground are, there is a definite need for people in the office. People in an office win the contract in the first place.

broady a lot of these guys are ( self employed) they have to buy their own PPE, they have to pay for courses to get a CSSC , they have to get to the location on their own steam , Many are claiming universal credit because they don't earn enough to live off,
I know you hit the jackpot working for Mc calpine, that was pre Thatcher times,
these lads go out taking their wives/girlfriends in MacDonalds for a meal in their high viz work gear, we see them all the time

I have to agree with you William.

And as for the critics ...well the fact is, you cannot say something is being done improperly unless you know yourself how to do it properly

Pre Thatcher??? I worked for them from 1973 until 2006. I didn't hit the jackpot. I tramped the length of the UK and I made a living. One year I was in Inverness and the following year Worthing. I can assure you that no one working on any of the contracts I was on were eligible for Universal Credit. We were paying welders thousand a week in 1981. Back in the day going self employed was a recognized " fiddle" Guys on 300 a day paid themselves minimum pay and kept their tax bill down. The rest they paid themselves in dividends which only attracted 20% tax when if they worked on the books they would have been paying 40% plus they claimed all sorts of expenses. Now if I had a pound for every time i heard a plumber called a hard faced grabbing barsteward I would be wealthy.

That job will have been put out to tender, the lowest bidder will have won it.

Sorry GB but they are not going to pay people premium rates and wipe out what little profit they expect to make, to work evening, weekends and around the clock just because the locals are getting grumpy about being held up for 10 minutes

there you go Sledge has a horse farm in yorkshire, broady has home and wealthy life style in Canada with regular trips to, anywhere and a hard faced grabbing barsteward plumber in Wigan shopping in the Company store over the railway tracks in merseyland,
And I wish you both well, because, I'm happy where I am and proud to have contributed all my life to England,

hey sledge don't forget about that chicken you promised

Tom,
I contributed for 40 years. I paid into a company pension scheme for over 30 years. I wish I lived the life you describe. I have a home and we have holidays but so do lots of people. I am not apologizing for being " a desk jockey" as you say. I KNOW contracts could not be won / run without them. When you switch your gas fire on tonight or fill your car just remember how those products arrived at your home / garage. They came by pipeline.

Ok your three were in the Big League, but can I comment as a humble council dwelling oink

Two big jobs done in my place over the years, a new kitchen and a new bathroom, years apart, but the jobs were designed in the same way, like clockwork, a choreographed procedure those lads had done hundreds of times, the bathroom lot had been putting in bathrooms for six years, on the same council contract.

So first crew come in and rip out the old bathroom suite, then a different crew remove the bathroom floor, separate crew take away old units, and rubbish, then another crew deliver the new units, and then Tom's mates the plumbers arrive and the fun starts, 1960s system built crap put in by monkeys, as they described the place.

Which means the plumbers have fun getting the new stuff to connect to the old plumbing, which is not that old really, but I suppose that is what plumbing is all about, it took two weeks for the job to be done, and they told me that they start between 7.30amand 8.00am in the morning, and the finish early on Fridays, in practice they arrived outside at between 7.30am and 8.00am getting their stuff ready, but they did not come in before 8.00am, and on that first two days, because of problems they encountered they did not leave until nearly 7.00pm, other wise I would have been in a bit of a mess.

So don't call those lads to me, even of they did bugger off at about 1.30pm on Friday, they worked bloody hard

Tommy Tee you shoot from the hip. plumbers work hard and no one see's it all, before we get to your gaff, we need to pick up stuff and. you know what the traffic is like, then we cope with every situation we come across, its like grabbing a tiger by the tail, you cannot just walk off, we have to win because, there is no one behind to take over, its also very rewarding too,

But if a desk jockey didn’t order the bits and pieces for the plumbers merchants there would be nothing for you to pick up.,