The operator of the in-house General Post Office within it has also quit, throwing into confusion both the future running and location - if any - of the key business in Wigan too.

Smiths has been in the town for decades and occupies about the most prominent retail pitch in the whole of Wigan centre, and yet the stationery, magazine, book and entertainment chain says it cannot “trade viably” from the site and will close its doors before the end of the year.

It is another piece of sickening news for Wigan which has already lost Marks and Spencer, Top Man and Top Shop; stricken Debenhams looks likely to close its huge department store soon and Smiths’ neighbour the Yorkshire Bank is putting up the shutters in the spring.

It is widely known that WHSmith, which used to be in the Galleries until it took over the Standishgate site from John Menzies when the Grand Arcade opened, has been in financial difficulties during the pandemic.

In recent years it has twice been branded the UK’s worst retailer for its in-store experience but remains a staple of many a high street.

While being among one of those essential businesses allowed to stay open during lockdowns its finances have still suffered badly because a lot of its briskest trade is done at airport terminals which have been nigh on deserted for much of the past 12 months.

A WHSmith spokesperson said: “We can confirm that the WHSmith store in Wigan will close later this year.

“Unfortunately, we are unable to trade viably from this location and the decision has been taken to close the store as a result of the lease expiry in December.

“We have been working with Post Office Limited in order to give them as much time as possible to find a suitable franchise partner to ensure continuity of Post Office services within the town.

We have been working with Post Office Limited in order to give them as much time as possible to find a suitable franchise partner to ensure continuity of Post Office services within the town.

“We are disappointed to be losing our presence in Wigan and remain very thankful to both our store colleagues and customers for their support.”

To much outcry and opposition, Wigan’s old GPO closed in June of 2019 in a cost-cutting exercise and, like many in the land, decamped across town to take up space within the local WHSmith.

Now its future is in double turmoil as it seeks a new home and someone to run it.

A Post Office spokesperson said: “The operator for Wigan Post Office has resigned and the branch is due to close at its current location in December.

“We know how important a Post Office is to a community. The vacancy is advertised on www.runapostoffice.co.uk. Any move would be subject to public consultation.”

Wigan Council has been trying to reinvent the town centre as less of a retail hub and more of one for hospitality, entertainment and accommodation.

It has big plans for The Galleries, having recently announced its chosen developer for the £130m project which would include a cinema, indoor golf and places to eat and drink, hundreds of new homes, a new market hall and a hotel.

That is forecast to be complete by 2025.

But at the rate things are going, it will have to be thinking of rescue plans for other parts of the town as well, long before then.

RDI, landlord for the Grand Arcade, which has been in receivership for the last year, declined to comment on the latest developments.

Wigan Council’s director of economy and skills Becca Heron said: “We are disappointed with this news as we understand how valuable this resource is to our community, however, all town centres are currently facing significant challenges and we know that retailers need to adapt to this.

“We remain committed to ensuring the town centre is a vibrant and prosperous place to visit through our long-term vision for Wigan.”

I DID hear last week that they were closing i just think these people don't give a flying toss ,this is just another nail in WIGAN'S COFFIN as for the big white elephant ( grand arcade ) what a joke that place is can anyone wonder why people do not want or WILL NOT WANT TO COME INTO THE TOWN ANYMORE ! its like a ghost town as for this new development this is another JOKE BY THIS COUNCIL ...

We'll soon look like one of those ghost towns that you see in westerns..Mesnes St is rapidly heading that way...it's disgusting what's going on.

The thing is that folk would rather use the 'out of town' shopping centres like Robin Retail Park, where the shops are thriving, and they are adding shops and other retail premises to the place, not losing them.
Free parking is the main thing and everything is in one place, it is what folk want.

Wh smiths was rubbish, much preferred Woolies. My last 2 visits to town i noticed even the fella outside Wilkos with the accordion has give up on the town.

Sad for the staff but the place was a dismal shopping experience. They gave up on it years ago

It never seems to have any character does it.

If it was called "WH Smiths of Wigan" it would've been a different kettle of fish.
You only have to put "Wigan" somewhere in a title to gain widespread attention in eerrrrrrr, Wigan, Laaaaike!

It didn't save Smiths of Wigan unfortunately. And that was a real book shop.

Fancy, having a business in Liverpool called 'Wigan Dirt'!

Whatever will they thinkof next?


Down the road from Higher Ince
There`s a place called Wigan town
Which had an Olympic swimming pool
Till the council pulled it down
It also had a market
Soon to disappear
And a famous rugby stadium
Where the masses came to cheer
And tucked away is a parish church
Shut for most the time
Not far from the galleries
Wasting away in decline
It had a Marks and Spencers
And a local Morrisons store
Handy for taxis and buses
At the rank and depot next door
Gone is the Ritz and Casino
Along with Wallpaper Supplies
And all that`s left is Squeezebox Joe,
Poundland, pigeons and pies.

I thought that sounded like one of Kevin Holcroft’s, Basil.

Kevin regularly posts on the Facebook group: Characters of Ince

He has a website as well - The Bard of Ince

Terrys
20honsed ·
***Important announcement ***
Several months ago we applied to run the post office (when the news about WHSmith was first made known over 18mths ago). Since then the people behind the post office franchise have offered it to tender, removed it from tender and then offered out again!
So, we applied to run it...twice!
The latest process has taken around 10 weeks and they have lost my personal, sensitive data twice now.
This has meant the process for us is taking longer than expected. Given the figure we initially would have to pay to run it is around £40,000 we think it should be a better run process. It seems these people couldn't run a bath.
We are close to the point of walking away from it as it does not fill us with confidence going forward. Just thought we'd let the public know. 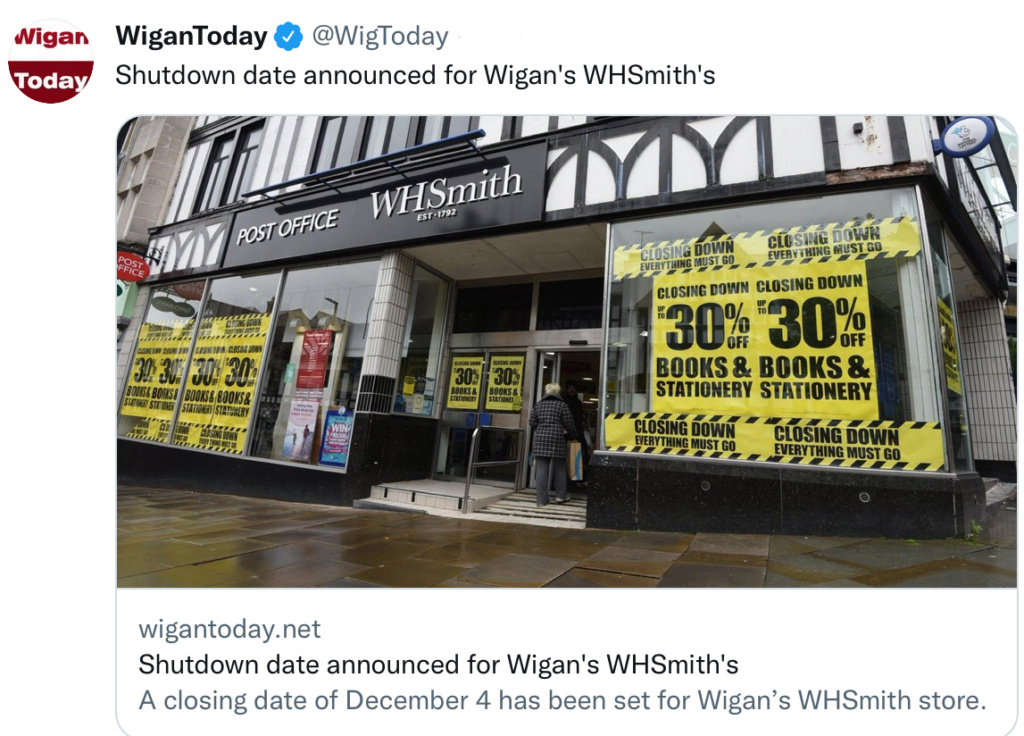 Wigan isn't a good place to shop anymore, the market is very poor and most other things people want to shop for are down at Robin Park Retail or further out of town. People won't use places like Wigan especially while beggars, drunks and smack heads are given free rein to sit and bother folk for money etc. Just look at Christmas times in Wigan now, it's dismal, last time we went Christmas shopping most places were shut and we came home, waste of time.

No customers no shops and who can blame them for upping sticks and leaving.

I liked Chorley always worth the ride, good market. Not been since Covid started though.

IT'S ok saying shop at the retail park ,that's super if you have a vehicle what about those people who don't and to depend on the local bus company????ARE there any bus that go onto the retail park ? if not why ?? just asking ??GB

I'm sure I saw a tumbleweed a'rollin through town the other day !!!!

There used to be a bus that went down to Asda but that was scrapped. The pensioners and those without vehicles are getting a bad deal when it comes to town centre shopping.