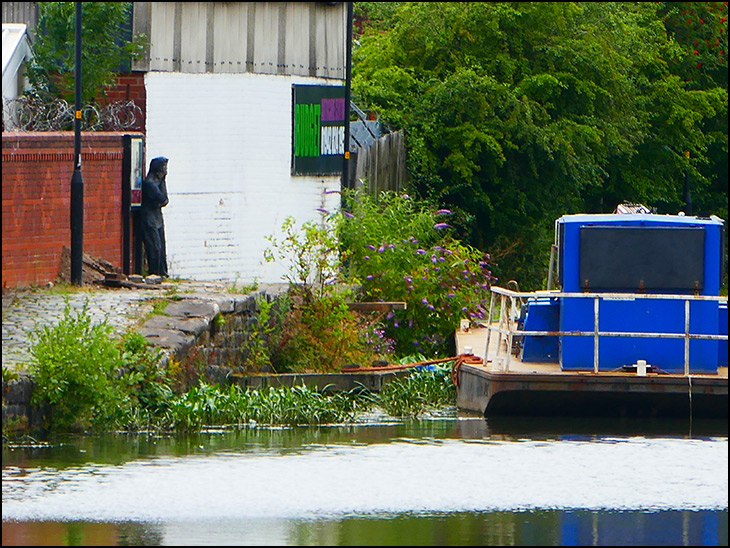 Is that a person stood there or a statue.

No response from our Howfen correspondent as yet I see DTease. She's probably somewhere out in the bush near Tittybong I would imagine, experiencing a little dreamtime with the aborigines. I know she was talking about going to Oz. She'll no doubt be getting stuck into those witchetty grubs even as I speak, prior to daubing her body with ochre in spiral patterns of dots from the end of a stick, then jumping into the billabong to wrestle a few salties. I daresay we'll be getting a full account on her return.

Perhaps Mr Byrne is doing you all a favour by exposing all the grot spots in Wigan in the hopes that the Mighty Powers That Be....will get something useful done about the said grot spots....instead of knocking down most of Wigans Heritage...or has that gone already ??

I have grave doubts about our correspondent's ability to find her way to Tittibong Whizzer.
I can just imagine V asking for directions. I think it would go something like "Er excuse me cobbler, can you tell me the way to er Bosombong?.
I hope she remembered to take them bottle green shorts, they should go very well with the white body paint and, what's more, they'll match perfectly with the insides of them Witchetty Grubs should V get a bit sloppy with her eating.
I have a vision of V watching an Aborigine spearing a large Lizard and throwing it on a fire and then saying "That's nowt, where I come from we saw yeds off Cows"
No doubt she'll soon be in touch with tales of Dingo dodging and Sheep shaving.

It is the site of the Wigan Pier tippler for coal which has just been refurbished.

Maybe Mick will be showing an after photo.

I think it's a statue, Maureen.

Irene,the more I look at it,the more I think you're right.,,it's very spooky isn't it.

It's the Grim Reaper making his way to the town centre to sound the Death Knell.

Wait patiently gentlemen … the moment she sees that blast of French Ultramarine, and yonder buddleia, she'll be back here puckering her No.6 sable brush in readiness for her next masterpiece - she may even have already completed it.

Yeah, Bosombong, that sounds about right for our correspondent in the outback DTease, after all, by her own admission, she is a laydee.
Now with regard to stoking up on witchetty grubs. Speaking for myself, I find the idea totally revoluting.... There, I knew I'd slot the word in somewhere eventually....But to be fair, according to Wikipædia, when cooked gently over hot ashes, the inside of the witchetty grub turns yellow, not unlike a fried egg, whilst the skin of the grub assumes the texture usually associated with that of fried chicken.
Hmm,....I wonder if they sell them at Sainsbury's?...I'll drive straight round there on my tame ostrich first thing in the morning to check.
Furthermore, Wikipædia then goes on to say that when the Witchetty grub is picked up, as a defence mechanism, it excretes a vile smelling brown liquid.
Well who can blame it?
If a sixty foot black fella picked me up between his forefinger and his thumb with the sole intention of eating me, I'd probably do the same thing.

Going by your description Whizzer, I’m sure I partook of something similar to those Witchetty Grubs in a late night Wigan eating establishment a few years ago. “Vile smelling brown liquid” definitely rings a bell. Mind you, it had been a long evening and it could be that I just got overly energetic with the HP bottle. Whatever it was I don’t recall leaving anything on the plate.
You tend not to be too fussy what you eat after a few pints.

Yes Maureen, it does look spooky !

Poor woman - turned to stone missing the boat.... Story of my life....!!
It was to the Land of Big Skies Gentlemen and they were a lovely cobalt blue.

Perhaps we should also have a 'newspaper' column as well as a 'poets' corner for our would be journalist 'hacks' of whom there are quite a few! Very interesting ' bake off' on the witchetty grubs but I don't think I will be trying 'um!

The Witchetty Grub. ( a pome wot I rote )

Some folks believe that when ones life has run it's strange erratic course,
ones soul will once more be released, returning via a different source.

At quiet times I've sat and pondered whether this be true or fake,
and should perchance it be the former,
which decision I would make.

Initially, the choice to come back as a dog appears the best,
to pee on all the lampposts without fear of censure or arrest.

A cat's life also isn't all that bad I feel obliged to say,
I'd keep the entire street awake all night, then go to sleep all day.

I've been through Noah's inventory down from zebras to gnus,
on balance though a witchetty grub's life's the one I'd likely choose.

I'd live in DTease' garden..just think.. wouldn't life be one great farce?,
I'd climb up all his shrubs and trees, then slide back down them on my [deleted by admin].

I'd creep into his greenhouse to eat all his tender yummy plants,
then crawl along his washing line and desecrate his underpants.

I'd wait till he weren't looking, and then when my chance had finally come,
I'd scramble swiftly up his trouser leg and bite him on the bum.

With all these jolly japes I'd have, I'd finally be plumb tuckered out,
a fortnight's kip then in my pupa's what would be required no doubt.

But strike me handsome, I'd be well impressed, they'd really look quite good,
I'd flap them up and down a time or two to fill them up with blood,

then when I'd spread them out and left them there to harden in the sun,
I'd maybe have enough time left to take them for a practice run.

I'd ponce around the garden for a while, just merely showing off
my wings to all the neighbours, who'd say
" Goodness gracious, what a toff ! ".

I'd exercise them daily, until they became quite big and strong,
then buy a map from Waterstone's and flutter off to Tittybong.

Come into my garden Whizzer
How welcome you will be
'Cos I've just been down to B&Q
For a can of DDT.

Just fly towards the light my friend
Where all your cousins go to flirt
And you'll soon be lying on yer back
From a single well aimed squirt.