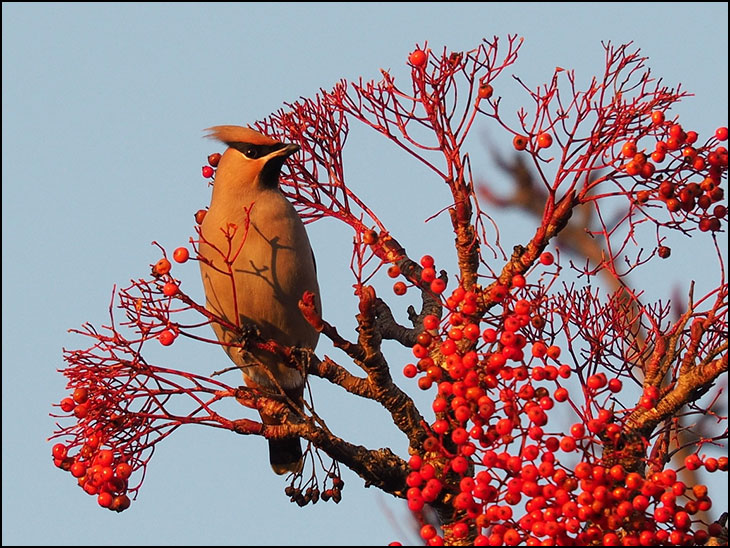 He must have been lost to have landed in Scholes

This is one of the best bird and nature photos that I have seen. Bravo David.

Good photo.A rare bird which l have never seen.Was this in Scholes

What beautiful colours David..that is again another feast for the eyes..it would brighten anybody's day...thank you.

Super shot David. They were knocking about Scholes for about 3 weeks but I think all the berries have gone now.

Goodness me! That is a bright picture on a bleak day....the bird looks lost.

Brilliant photo Dave and you are very lucky indeed to have had the opportunity. Waxwings live in northern Europe and ten to visit Britain when there is a food shortage, our milder winters mean they have more chance of finding food here. Well Done !!!!

David that really is a superb quality shot!

What a brilliant photo with brilliant colours. I wonder why they pick Scholes.

Superb photo David and a rare sighting well done,before I looked at the name I thought it was one of Mr Dave Oy,you missed out on that one Dave lol.

Who said winter was dull and dreary?
Super.

Scholes Malc I do get up the Scholes quite a lot.
What Im on about is the bird landing in built up Scholes when its got the rest of Wigan to choose from.
And the bird wont have any idea how many of them Scholes kids unwrapped air rifles on Christmas morning.

Mick you really are a despicable bigot

Yes and Shevington is truly a beautiful place with the M6 running through it, not to mention a idiot on a bike with a camera who lives there

Sorry i am a idiot, i open my gob without thinking, i will try to be nicer on here,

About time a lot of people on here started being better to others. Anyway, what is wrong with Scholes? It's a much better area than a lot in Wigan and district.

I agree with Maureen, it's certainly a feast for the eyes, such vibrant colours and an exotic looking bird. What's the secret of being in the right place at the right time?

Splendid David - you're a very talented photographer - thank you.

I was born in Scholes and had a wonderful childhood , I wrote the article below for Wigan's Past Forward Magazine a few years ago.

MEMORIES OF SCHOLES
A TOWN WITHIN A TOWN
BY TOM WALSH

I have very fond memories of Scholes and its people. Born in McCormick Street, named after the second parish priest of St Patricks, this in itself made it part of the history of the the township. I describe the area as a township because that was what it was, a separate community in every sense. People had a feeling of belonging to Scholes first and Wigan second.

The vast majority of men were miners, and many women worked in the cotton factories both in Wigan and further afield traveling to Bolton, Rochdale and other local towns by coach or train, putting hours on to the working day because the pay was slightly better. I remember hearing the knocker up rousing households and not leaving until a response was forthcoming from the inhabitants, the lady who filled that particular role in the streets surrounding my home was Agnes Wynn who charged the princely sum of a shilling a week, which was collected every Friday evening. Agnes, lived in Higham Street and because she had to be up and about her bushiness on the morrow, went to bed very early, children were told not play near her house as she needed her sleep, if she overslept half the parish would miss a days work!

Scholes itself had shops of every sort, so much so that many older people would rarely if ever go to the town centre as almost everything could be sourced locally, from ladies fashions, Vi Almonds, to motor bikes, Millers, we had two cinemas, countless public houses and grocers, a Chinese laundry Moy Toys later to become Wong's and a myriad of other businesses. Locals say that if they had put a roof over the street in its heyday, it would have been the first Trafford Centre! Many shops had nicknames, Pie Joe's being one, it's a wonder he didn't go bankrupt, I remember going there for more than one neighbour for a meat pie, they would send a large jug with the instruction to fill it with gravy, free in those days. I think the surplus was for use on the Sunday dinner! Another amusing name was Polly do out, a clogger, it was said she could put a clog iron on a bladder without bursting it! One of the less hygienic shops often had a cat sat on a flitch of bacon. Needless to say most housewives avoided that shop's delights. A temperance bar, though fair to say it wasn't the most frequented of venues. Public houses seemed a more tempting prospect to most. Similarly many of these had colloquial names the two most famous the Dust Hole (Rose and Crown) this establishment was reputed to sell the best pint in the district, and was one of the last ale houses, only licensed to sell ale and porter, and the Kill and Cure (the Regent) the latter because it was near to Dr Hoey's surgery .

Whilst times were difficult for many the feeling of community was tangible, even though many struggled and had little they would share what they had. Anyone without family who fell ill would be cared for in the neighbourhood. People could, and did leave the door unlocked, in my Mother's case she would leave the rent on the sideboard and the rent-man would let himself in mark the book and leave, I never heard of a house being burgled or of any dishonesty. When recounting this fact the reply often comes back "there was nothing to steal" on the contrary, every house had a gas meter full of money. After the gasman had emptied the meter and left the rebate there was unusually spare money in the parish, children armed with shillings bombarding local sweetshops.
No deed for ASBOS, a quick "I'll tell your mother", or a more a portent "I'll bring Farther Lappin, the highly respected parish priest of St Patricks, was enough to bring the most unruly youths to book.

The overwhelming majority of houses were very well kept women would mop the step daily, even an oblong area of pavement adjoining the doorway, and woe betide anyone who walked on their labours. Mondays was washing day, few had washing machines, boilers, dolly tubs and rubbing boards was the method employed by most households. It was said that there was a rainbow over Scholes on Mondays! There was great excitement when the first launderette opened, The Bendix, half a crown(twelve and half p.) for a 9lbs wash, the price alas put it out of the reach of many families, as an example that would have bought fish and chips twice over in the early 1950s! Every day a different task, bedrooms Tuesday, baking another day and so forth. Thursday in our house was the day Mother would black lead the Yorkshire range and tackle the brasses, I remember the cleaning agents Zebo and Brasso each with its own distinct smell, as had Mansion polish used liberally on well cared for furniture.

From an early age I was aware that people, not from the area, looked on Scholes with some misgivings to say the least, not aware of the warmth and honesty of its populous, believing the many negative comments made by commentators who had never visited the locality. Some who had choose to concentrate on the less pleasant aspects. George Orwell's book "The Road to Wigan Pier" certainly didn't do any favours for Wigan as a town and Scholes in particular. It was generally agreed in Scholes that Orwell, who calmed to be a socialist was a charlatan who used his so called socialism as a way of easing his conscience. Could someone who attended Eton (Scholarship or not) possibly have the slightest empathy with the beleaguered working class of the 1930's? His deeming comments prove that he didn't. On visiting Wigan, he sort out the poorest of the poor to suit his his own agenda. In the book, he says "If there is one man to whom I feel inferior to its the coal miner" that sentence, ought to have 'stuck in his craw', they trusted him and he betrayed their trust, I suggest purely for profit and self promotion. If there is an afterlife I think he'll feel he owes Wigan an apology.

I am very proud of my background, and wouldn't have wanted to be born and reared anywhere other than my beloved, and much maligned Scholes of yesteryear. Maybe you had to be born within the sound of St Catherine's or St Patricks bells to fully appreciate the wonderful atmosphere and sheer goodness of its people. I am often accused of looking back with rose tinted spectacles. I suppose there element truth in that, but better that, than looking back in anger.

Don't compromise Mick, tell it as it is mate.

Lovely photo from David; special memories from Tom. A lovely blend of talent from Wigan World.

The whole Labour party is full of Champagne Socialists, started by Blair and his cronies. Thats why I vote UK or Tory depending on whose standing. We dont all live in Islington as Corbyn expects. Nice pic by the way.

Agree wholeheartedly Tom I wouldn't have wished to be brought up anywhere else! We may not have seen such exotic birds as that one -unless it was 'stuffed' and under a glass globe - but it was the best!

Thanks all. The flock of waxwings visiting Scholes were mentioned on a few Facebook groups. They didn't come to feed on the berries when I first went to look for them, this photo was taken on my second visit.

Great photo,l did go and see them twice ,approx 20 there the second time ! Also saw one at Orel water park a couple of years ago

Brilliant photo I could frame that and put it on my wall, the colours are magic..

I am n Lanzarote at the moment checking my beloved Wigan World website. To read your comments Tom Walsh about Wigan fills me with my love for Wigan. I am a proud Wiganer and love my accent and try to,spread it wherever I go. Ar yoreet am not so,bad AV ad better days al grant you that am neither happy an am neither sad, am awreet am not so bad. Chonkinfeckle, luvum

Hi Tom , enjoyed reading your piece until Orwell . I could mention (and ,I am sure ,others on WW could) mention those categorised as a charlatan who have claimed to carry the flag of socialism. In my personal opinion, Tony Benn, Tony Blair , Neil Kinnock also carry such merit . The term , working class , has always worried me, Does it mean there will always be those on top of a hill forever and those also at the bottom , because they were born into that class? Do we bridge ruptured pipe on the identity of its class?