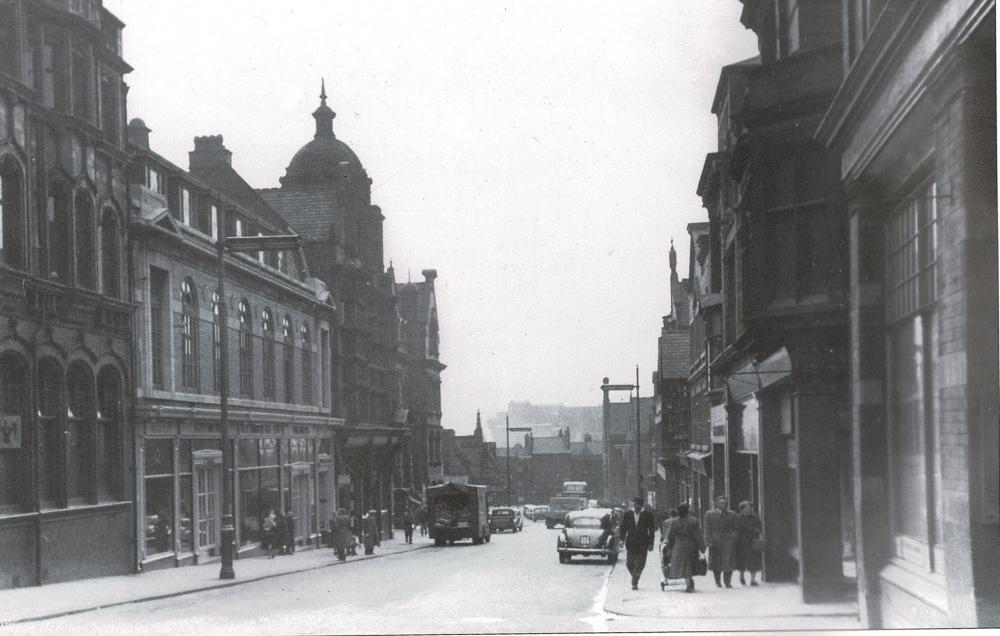 I was only born in 1952 but I can remember Library Street like this, probably in the late 1950s/1960. My Mam and I always used to catch the bus home to Ince from outside Timberlakes, following visits to Wigan. The bus stop was roughly where the large vehicle is parked.

Most of the buildings are still there but there’s an ‘air’ of better days about the scene. I remember Fisher’s Carpets where we got our first ‘fitted’ carpet - Previously Timberlakes. In the distance at the bottom are buildings I had forgotten about near the car park. When on the bus many a time I tried to picture them in my mind.

There were loads of bus stops down the left side of Library Street, right into the 80s. Many buses started at Market Square and then their first stop was there. I lived in Abram growing up and we could get the 613, 557, 558, 660 or 661, which went on to Irlam, Earlstown, Warrington etc well beyond the Wigan area.

You can still get a number of buses in Library Street, Gareth, including the 360 bus to Abram, where I live; (it goes on to Golborne and Warrington after Abram).

Right at the bottom of Library St. on the left was the Pavilion Cinema, which became the site of the mid 1960s new swimming baths. Best avoided unless you were desperate for some film to watch.

Unless there was a good film being shown we used to avoid the Princess Derek. Boy was it a dive.

Brain is still on a go-slow, it was The Princes.

Linma, the Princes and Pavilion weren't the most salubrious, but what about The Palace?

EMPIRE was the worst one. Went once, just before it closed, and all through the film RUN SILENT RUN DEEP ( I loved films about submarines) I could feel something dropping on my head. Turned out it was plaster off the ceiling

Derek for us it. was either the Ritz, the County, the Court or, at a pinch the Princes. Is it true that at one time there were a dozen cinemas in Wigan?

My mam took us to the Pavillion a couple of times if there was nothing on at the Scholes Pictures. Every week for years we went to the pictures because we didn’t have a TV. Once or twice we went to the Palace through the wrought iron gates. Only on very special occasions we went to the Hippodrome . I have to say the least favourite was the Pavillion as it stunk going through the doors after paying. I loved the Scholes Pictures the best,I will never forget the plush velvet seats and the ice cream in the interval. If we had toffee from next door we couldn’t have ice cream. That was it

THIS INFO. IS ALREADY ON THE WEB SITE. TOPIC ' CINEMA' . UNDER THE PEOPLE HEADING THE PERSON PUT IT UNDER THE WRONG HEADING.

Ashton had the Hippodrome (later the Scala) on Heath Rd - originally a theatre, the Palace on Bryn Rd and the Queen's, Wigan Rd

Hindley had the Central Cinema ( which was the Central Hall, Frederick St) The Victoria, Market St( now the Conservative Club?) which was also known as the Castle Cinema. The Palace on Market St and the Rex( later the Monaco) on Atherton Rd.

Ince had Ince Picture Palace (later the Doric and the Bug!), Humphrey St, and the Regal in Manley St

The Majestic in Orrell, the Lyric, Up Holland.

Pemberton had the Royal Electric Theatre ( later the Half Way House Picture House, the Carlton and finally Unit 4) The Queen's and the Central Hall, Lamberhead Green.

Platt Bridge had The Miner's Hall (known as Sniggy's! later the Savoy), and the New Picturedrome (later the Palace), near the King Billy.

Standish had a picture house in the 1920's and one known as Sammy Grant's or the Penny Itch as well as a record of a Market St Cinema - though this could have been the same one - on Pole St but backing onto Market St - and the Palace, Cross St.

LInma, there were many cinemas at one time other than the ones in the town centre. There was one in Gidlow, two in Scholes , the one Veronica mentions And another called The Labour, two in Hindley, two in Pemberton , one at Upholland, one in Orrell and one in Standish that I can recall.

Wow! I remember the one in Standish and went to the one in Platt Bridge many times and what a noise we made on a Saturday morning stamping our feet and shouting at our heroes on the screen.

I think the County had a section with wider seats, popular with courting couples.

You’re right Jack me and the boyfriend happily sat in one of those seats.