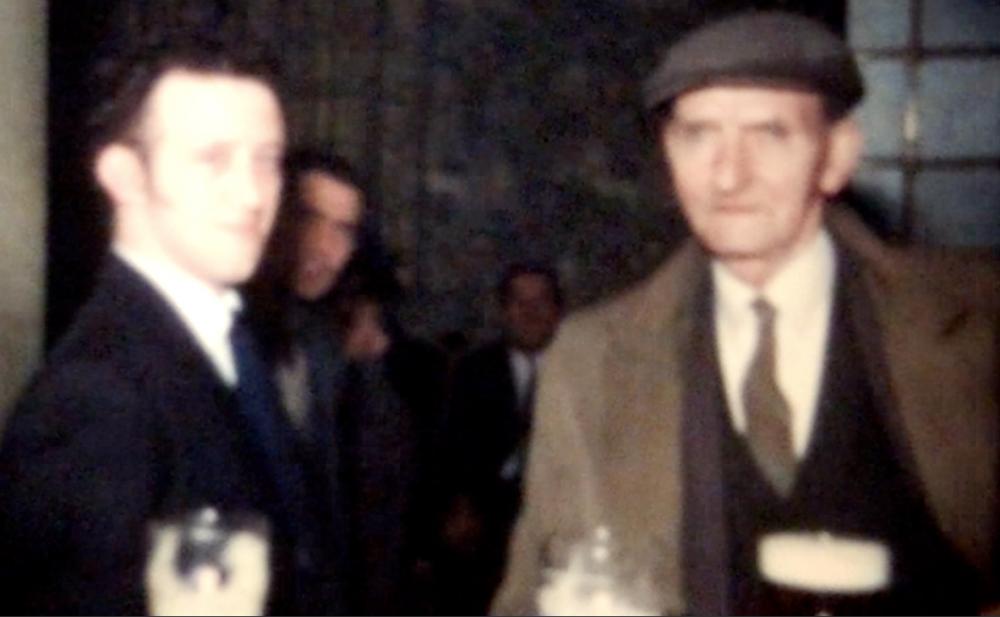 Jimmy Hurst ex-miner
Photo: Keith
Views: 1,618
Item #: 25424
Apologies for the poor quality but this is a still photo from a cine film. Probably from around 1970, I can't name the customers seen here in the Wellfield Hotel vault, apart from the gentleman on the right with the flat cap - he's Jimmy Hurst, he had a brother Albert Hurst who used to be a waiter in the pub. Jimmy would, from time to time, "hold forth" and one tale I vividly remember was that aged 12 and down the pit with his "light" he became lost - that was bad enough but when his light went out that was frightening to say the least. If I suggest he was about 70 at the time of this photo then he would have experienced this nightmare just before the first World War. The photo is poor but I felt it was worth posting just to relate Jimmy's tale, something that I clearly remember from over 40 years ago and an experience Jimmy never forgot his whole life.
Back

There is no deeper blackness, than being down a mine, without a light for illumination. I have heard, in the past, that pit ponies had an excellent sense of direction, even in total darkness.

Keith, despite the blurriness I am pretty sure the second person from the left in the background is Jack (Ashurst?) who was a patrol car driver on the Wigan Borough Police force. He lived in one of the police houses on Norwood Ave.

Hi Derek, I can see why you thought it might be Jack Ashurst but when i run the film on it's not him. Jack usually was found in the Buffet, I have posted a photo of him previously.
Albert I would have thought the whole experience of Jimmy's nightmare would have traumatised him, it would have been bad enough for any miner let alone a 12 year old.

Keith. It is a wonder that Jimmy's experience didn't put him off, going down a pit again. In those days, you had to grin, and bear it, or starve.

Sadly, Albert that’s only too true. Some 60 or 70 years before Jimmy’s “experience” the Government was so concerned about child labour in the mines that they set up a commission, the Children’s Employment Commission of 1841. Examples of statements taken illustrate the terrible working lives of little children. This is one which was published in Bob Blakeman’s excellent book, “Wigan. A Historical Souvenir”
Henry Gibson, Drawer in one of Lord Balcarras’s, Haigh, near Wigan, May 13th 1841
“How old are you?” - Nearly fifteen
“You are a drawer in one of Lord Balcarres’s pits I believe?” - Yes, I am.
“Are your parents alive?” - No. I live with my aunt, and I draw for one of my cousins. I did live with another master but I left him.
“Had you clothes given to you by that man?” - No, I had a jacket when I first went to him, but he pawned it.
“Do you get any wages from your cousin?” - I never draw any myself; my cousin draws my wages, and they gives me meat, and I get enough to eat.
“Do they find you clothes?” - They ought to do, but I have been a year with them and they have given me none yet; I left them once because they would not give me a pair of clogs and my cousin thrashed me for it.
“Did he beat you severely?” - Yes, he beat me with a big stick, and the mark is on my arm now (there was a severe bruise on the boy’s right arm) and kicked me with his clogs.
“What hours do you work?” - From five in the morning to half past five at night.
“Do you ever see other boys beaten by their masters in the pits?” - Yes, there is a lad called Jonathan Dicks, from St Helens workhouse, he gets thrashed very ill. I saw his master beat him with a pickaum (arm) on his lega and arms, and his master cut a great gash in his head with a blow of a pick, and he threw a ‘cut’ at him and swelled up his eye and made it blue.
“Are there any other lads who get beaten?” - Yes, there is another lad called Andrew, I don’t know his other name, he is about 8 years old, he comes form Liverpool, and lives with his master, and he is half-clammed (starved), and many a time he comes without any dinner or anything to eat, and we give him some of ours.
(The witnesses could neither read or write)
I defy anyone not to be moved by the blatantly honest statements given by this 14 year old boy and there were others of the same age who told very similar stories. The “good old days” is a very familiar refrain these days - it looks somewhat jaundiced after reading accounts such as these. By the time Jimmy found himself down the pit the worst excesses of child labour had been eradicated but what a job to be involved in - highly dangerous, unhealthy and unforgiving toil. Small wonder camaraderie was such an important ingredient of the mining workforce.