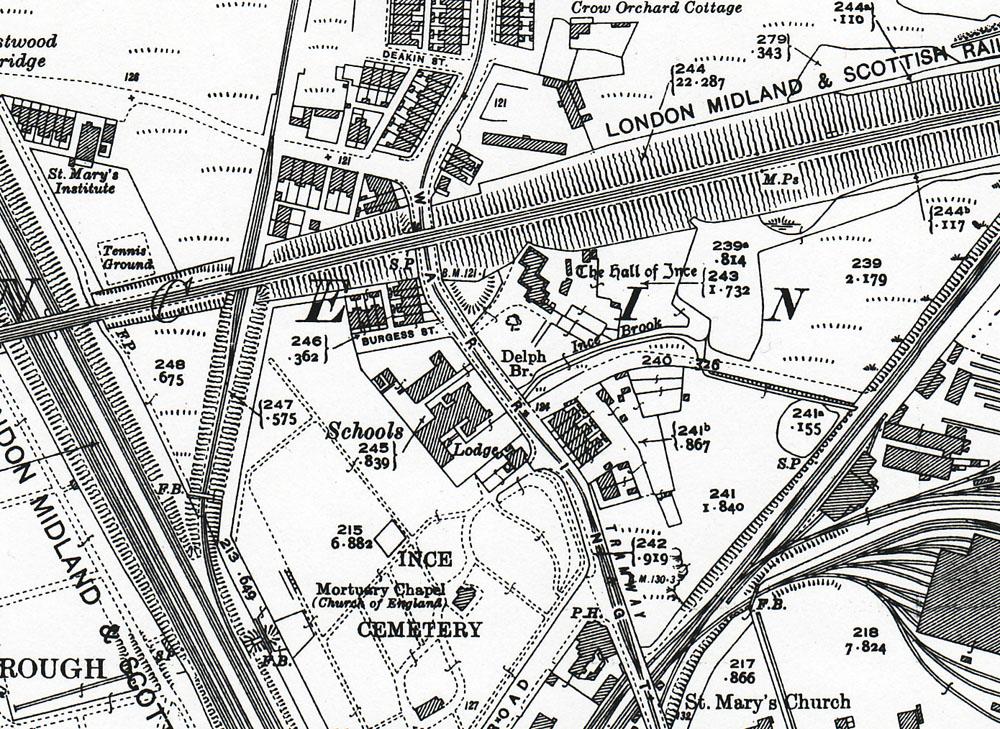 From "British History Online" put together in 1911, there are extensive details of the Hall of Ince. The citation is 'Townships: Ince', A History of the County of Lancaster: Volume 4 (1911), pp. 101-106. URL: http://www.british-history.ac.uk/report.aspx?compid=41387 Date accessed: 20 February 2010. Here is one small section
"The Hall of Ince was sold by Richard Gerard in 1716 to John Walmesley of Wigan, whose descendant Mr. John Walmesley of Lucknam and Ince is the present owner (1911).
Ince formerly possessed three halls, each bearing the name of the township; two of them, very much modernized, still stand. The first of these, now known as above mentioned as Hall of Ince, stands in Warrington Road, near the cemetery, and was restored about ten years ago, the old timber work at the back, which was then visible, being removed, and the wall rebuilt in brick. The whole of the exterior of the building, which was formerly timber framed, is now stuccoed and otherwise modernized, but the roofs retain their old stone slates. The building is now divided into three houses.
Another branch of the Gerard family also resided in Ince from about 1600; their house was called the New Hall.
The house now known as Ince Hall, which is situated off Manchester Road, near Rose Bridge, was originally surrounded by a moat and approached by a fine avenue of elms. It was a good specimen of timber and plaster building erected about the reign of James I, with a picturesque black and white front of five gables. The entrance hall is described as being spacious and with a richly ornamented plaster ceiling and wainscoted walls. Three other rooms also were stated to have been panelled in oak, and the drawing-room ceiling was ornamented with 'carved work representing birds, shells, fruit, and flowers. There were two chimney-pieces of fine Italian marble. The staircase was of oak and 6 ft. wide, the ceiling much ornamented with stucco. The best bedrooms were covered with tapestry.' In 1854 the house was so seriously damaged by fire as to necessitate a practical rebuilding. The ancient timber front has therefore given place to a brick elevation of no architectural pretension, and the house is internally wholly modernized. The line of avenue still remains, but the trees have disappeared, and the opening of coal pits in the immediate vicinity about thirty years ago has destroyed any sense of picturesqueness that the rebuilt structure might have possessed."