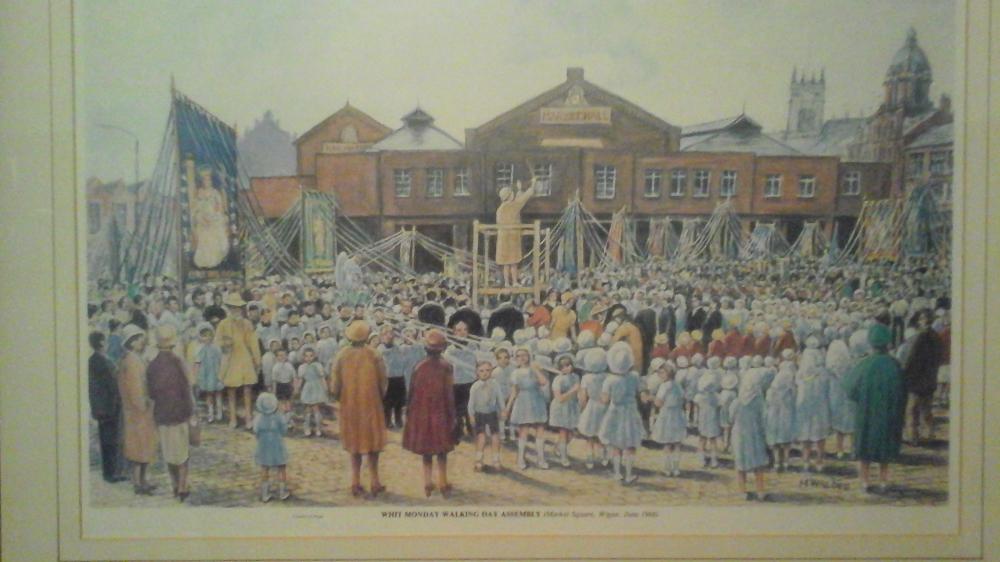 Just how I remember the Whit Walks. Beautiful painting.

Dave: It’s a very busy painting, but it does capture the times and events, very good picture.
Is this your effort’s Dave.

Ron is this the painting you mentioned? I bought it for my wife about twenty years ago from smiths bookshop. It is a print by H Walder

It is a great scene, you can almost hear the brass bands playing and your body vibrating with the beating of the big bass drums when they passed by.

There was some of the Harry Walder Wigan scenes prints on ebay, there's none of the walking day though, with just a few of the others left.

Hi Dave yes that's the one That is only the second one I've seen Probably not many prints were done of that particular image for some reason?

great picture. I have been in that crowd lots of times. The atmosphere was fabulous. I walked with St Josephs . I loved it all, buying the dress material, having it made, and with the crowds on square. Thanks for bringing back great memories

I too walked with St Josephs,it's a great memory to have,and singing 'Faith of our Fathers' was something else when the whole market square was alive with the beautiful tune...and who could forget our satin dresses.

Ron,the Art shop on Hallgate sometimes have Harry Walder prints..it would be worth having a trip there..I'll ask the next time I go that way.

It was the skirrrrl of the bag pipes that got to me and the swaying side to side of the kilts when we were walking behind the pipe bands. The climax at the end with ' Faith of Our Fathers and processing off the square and onto streets lined with trees and then passing the Convent with the nuns waving from the windows. Such happy innocent days.

I can't remember if I've put this article before , please forgive if I have.

Whit Monday morning has finally arrived, I live at the back of St.Patricks church, Mam has been up and about for hours, ironing, last minute alterations, cleaning and polishing, not to mention baking, in preparation for the many visitors we would most certainly receive on this very special day. The first thing I hear is the sound of the bands and the bagpipes tuning up, Mam has left the job of getting me up and ready, till as long has she dare, in case I get over excited.
I always need great persuasion to get from under the eiderdown, except on Whit Monday, Christmas Day, and come to think about it, Easter Sunday too. The teachers have been drilling us for weeks, on walking day etiquette, don't walk too close to the pavement, don't wave to people you know, and definitely “DO NOT TAKE MONEY”, the latter instruction was almost universally ignored.

The excitement is palpable, it has been for weeks, possibly months, it is difficult to explain how important a day this celebration of Whitsun is in the homes of the Catholic community. Lining up outside school the teachers and the helpers, usually parish stalwarts, would remind all the children again on the etiquette of the day with the added proviso, not to walk too fast. Starting off at St Patricks Church we would process down Rupert Street, on to Darlington Street, very poor territory for me, being from the heart of the parish, I knew only a handful of people from that street, although my Dad had an auntie, who if she remembered me, might have been minded to give me sixpence, or being a relative, maybe a shilling, I looked unsuccessfully ever year for Auntie Maggie, or was it Mary, which ever, had she spotted me she would undoubtedly have given credence to the old maxim, bloods thicker than water.

After the poor pickings of Darlington Street, into Chapel Lane, then onto Caroline Street where the welcome (though not in financial terms) was absolutely unbelievable, the parishes of St. Josephs and St. Patricks, both with large Irish diaspora communities, had an affinity that was tangible, even to a child, I remember with great fondness the shouts of
Come on The Pats from the old ladies of our sister parish.

On reaching the market square, to meet up with the other parishes, the two already mentioned, along with St. Marys, St. Johns and Sacred Heart. The heightened excitement, was taken to an even higher level, as hundreds and hundreds of people, and the massed bands seemed to have no end. The cacophony of sounds all added, strangely to the solemnity of the day and contrasted to the almost silence as the conductor mounted the rostrum, to lead the bands and the laity in hymns and The National Anthem, I think you would have needed to have been present to understand the feeling of nostalgia and pride, when Faith of our Fathers was sung, hairs on the back of your neck would stand to attention. The National Anthem was sung with equal gusto and then what seemed the long walk back to our parishes loomed.

The road ahead was going to be difficult, but realising that my best patch lay not to far away gave renewed vigour to my little legs, Scholes, Wellington Street( "The Wearing of the Green" ,always played when entering this street) and Hardybutts, full of Aunts, Uncles and older cousins, now working, as the modern saying goes "with disposable income", I would probably be able to buy a bike, or at the very least a scooter. The end result was a few Dinky Toys and a Yo-yo. I didn't want a bike anyway and scooters are only for babies.

On finally reaching home we were treated like returning heroes, having walked seven miles, forgive the poetic licence, be it seven, or three (nearer to the truth), it was a long way for the afore mentioned little legs. Now the business of the day to count the coins collected. We hadn't ignored the instruction ‘Not to Take Money’, but it would have been churlish to refuse, that's my story and I'm sticking to it.

Your home would be full of visitors, the table groaning with home baked pies, meat, meat and potato, apple, jam lattice and of course two flavours of jelly, along with Carnation milk, few in St. Pat's parish had a refrigerator in those far off days, although most could boast a meat safe, a cupboard with a mesh front, usually painted cream or white, I suppose
to make believe we had the next best thing to a fridge. I've never worked out why this devise would keep meat, milk, or anything else for that matter any cooler than an ordinary cupboard.

All the aunties and female cousins would pitch in making pot after pot of tea, cutting the pies and cakes into equal sizes, they had to be equal to save any arguments among the children. As a child I always wondered where all the uncles and older male cousins where, and was told they were having a chat, only years later did I realise that the "chat" was taking place in one of the many public houses that adorned Scholes in those days.
After the feast, the post-mortem, Mam had given orders that there should be no gossiping, everybody had done their best and that's what mattered. This diktat, along with the instruction from the teachers regarding money, alas was largely ignored .It was agreed that all the children looked lovely, but our parish just edged it, this sentiment would be common parlance in the homes of the other participating parishes of the walk.

Then down to brass tacks . The women of the parish, and their outfits, Agnes such-a-body, had that suit that had been on display in Vi Almonds window, it looked very nice in the window, pause, enough said, and then just to ram home the point "It wasn't right for the fuller figure", and the fur trim wasn't appropriate for Spring. Mary so-and-so, had that same hat, that had made three appearances before, or was it four, my memory's awful nowadays! The conversation goes on. Not gossiping you understand just expressing an opinion, you can do that even in Russia, Auntie Janey (Mam), says one cousin sullenly, having been admonished for unflattering remarks about a parishioners choice of frock, I think the K.G.B. might have something to say about that, mutters one of the more political aware cousins, almost under her breath. When Mam's back's turned, the conversation is returned to. However I digress

After a long day, all the guests had gone home Mam has tidied the house, and so to bed. Sleep doesn't come easily, after all the excitement of the day and thoughts of next year running through my head. I will be a year older and will consequently know more people, who I will not want to offend by refusing the well intended donation, and maybe, just maybe, my Dads Auntie Thingy, might spot me, she's very well off, she used have a chip shop, and if she does, I bet she'll give me ten shillings, to make up for past years. What with that and my new found friends I might get enough for a racing bike, with a dynamo, and in any case it will be a year nearer to be able to have a chat with my uncles. Sweet Dreams!

The most innocent a pathway,
but treasured all the same,
we came together each of us,
with one important aim,
Our parents made us special,
and made us feel real good,
the walking was a breeze from then,
like you knew it would.
The banners and the colours,
the fabrics that you chose,
were all a part and parcel,
for every picture pose,
We finally raised our voices,
and what a belt we gave,
Faith of Our Fathers,
the one we keep and save..

Marie Taylor, organist of St John's and a highly accomplished pianist and teacher, is conducting the massed bands. Precious memories.

The Whit walks in Wigan were only the Catholic churches that took place at the end of May the last being in 1968. Not sure if the Anglican and Methodist churches also had a procession in town.

Thanks for the memories Tom. For the girls it was picking the flowers up the night before, from a flower shop in Scholfield Lane.(can't remember the name) and having bandages twirled in our hair, to make ringlets.Great memories.

Thanks dave for a great walking day.picture of the whit walks All my family belonged to St williams rc church ince happy memories